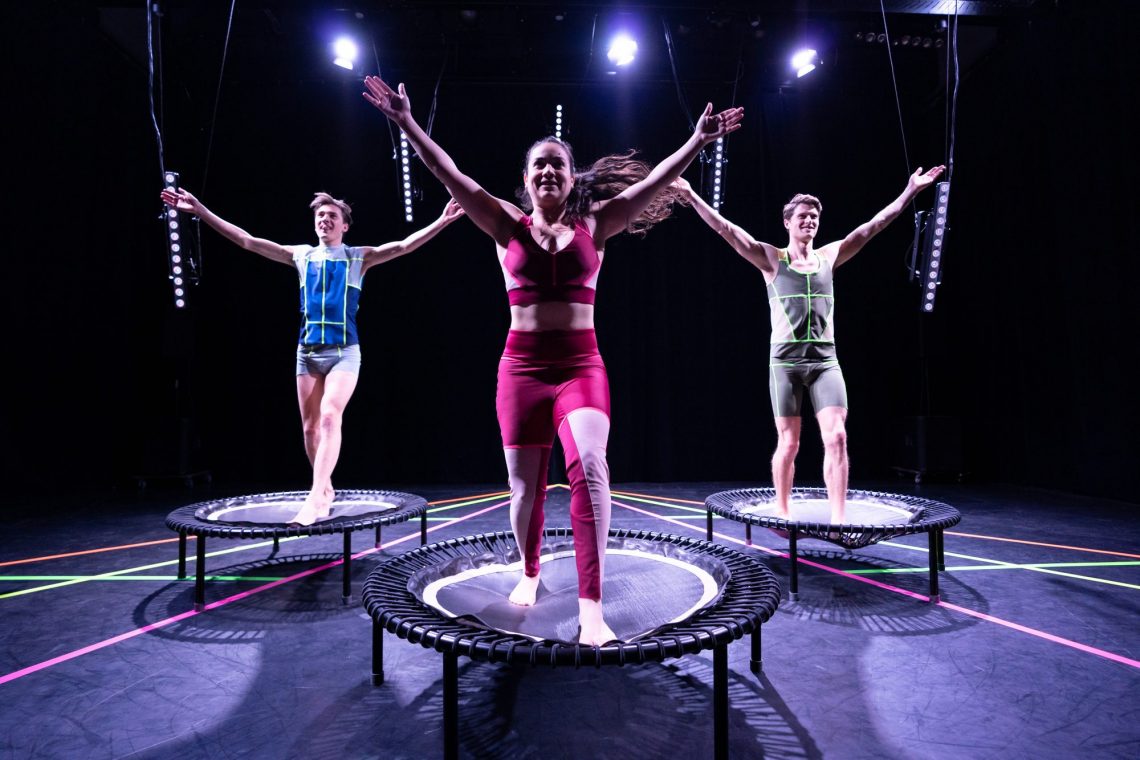 A Review of Igor Vrebac and De Nieuwe Oost’s OMG

In search of a piece to inspire my thesis – accompanied by a longing for (live) spectatorship in a theatre space once again – I’ve recently frequented theatre performances around Utrecht. My Dutch far from perfected, the genre ‘Language no problem’ is a comforting friend of mine. In the transition from virtual to the physical once again, performances are limited, and, consequently, English-accessible ones, too. Thus, the performances I’ve seen as of late often have little to no spoken language. Not following any traditional narrative structures, the shows are often colorful in their scenographic use, careful in the worlds, and meanings they create.

I’ve liked what I’ve seen thus far; they’ve made me think. To put it rather simply, I often leave the theaters questioning the dramatic medium as a whole. Or wondering about my own position as a spectator, regardless of whether I sat still in my seat or raved to a new beat. I’ve liked the performances alot.

Igor Vrebac and De Nieuwe Oost’s newest performance OMG was no exception. Though, any inclination I felt towards the show didn’t offer itself until the performers finally stopped jumping, the lights went out, and I left the theatre.

In OMG, physical theatre maker Igor Vrebac seeks answers in contemporary gym culture, which is, apparently, often mediated by means of the internet. Vrebac stages three performers constantly jump up and down on their own trampolines for over an hour (over an hour!). Music hard and lights fluorescent, the space is atmospheric of a rave, though the performer’s gym attire says otherwise. Choreography is simple in its form, with movement of the performers’ legs, for example, never really changing. Though, the ritualistic, relentlessness of it all makes it truly worthy of witnessing.

As I entered the Grote Zaal at Theater Kikker on the fine evening of October 3rd, the already-present performers grinned and locked eyes with the incoming spectators, acknowledging our arrival. Admittedly, this irked me. Normally, I must emphasise, I would be fond of this. To be actively recognised by a piece, or actors in a piece per se, gives me a warm, fuzzy feeling of the here and now. Of liveness, of the theatre. Though, on a night where I wasn’t feeling so well, I craved a, what I would call, commercialised performance. Clean, simply-structured, relatively minor reflective moments = a commercialised performance. They’re an admittedly guilty pleasure of mine.

To see three performers on trampolines, I was upset to be challenged, to be asked of my position as a spectator, to need to question what can be considered theatre anyways. Nevertheless, I returned a smile to the performers. I sat in my seat, not too close nor too far, sceptical.

The synchronised jumping began. Though intrigued at first, after 20 minutes I waited for something major to change. ‘Maybe they’ll switch trampolines, maybe they’ll get off, maybe I’ll join them,’ I thought. They did not, I did not. Instead, choreography became more complicated, the performers needing to turn to the side, then front again, arms up, arms down, altogether, and finally not. Wildly impressed, I wondered if they could possibly be keeping 8-counts in their heads. ‘How do they keep this so precise?’ It was glorious.

The jumping persistent, I watched the three grow more tired, foreheads shinier, arms less rigid in their repetitive movements. At some point, I wanted something to change for their sake, not mine. But, of course, the performers were well-rehearsed, powerful enough to withstand what would be another 30 minutes ahead. OMG didn’t finish in any spectacular manner, it rather just came to its end. Music off, jumping halted. Fierce applause followed.

As I said, my appreciation for the performance as a whole didn’t occur until this end. I walked to my bike, What was the message, if any? It didn’t matter, I realised. Rather, I relished in the fact that as a spectator I wasn’t asked to do anything radical other than simply give my attention to the performers as they outpoured their power. I was challenged in my spectatorial position, as well as able to witness the live excellence of discipline, choreography, and performance.

No question, it was my favorite show I’ve seen this autumn. If you ever have the chance, go see this, and be amazed at witnessing what the human body can achieve. It truly is an OMG moment.