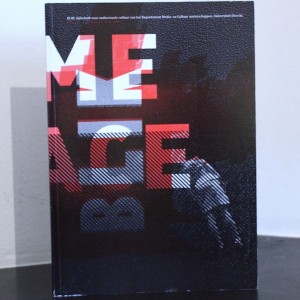 The centennial introduction of a standard time for the Netherlands in May 2009 is occasion for BLIK to explore the boundaries of reality with its special edition themed Time and Space. On our website you can read the issue’s full content overview, the article by Inga Schaub and the appendices of Panayiota Tsatsou’s article on the practice of e-commerce in Greece.

Art philosopher Rob van Gerwen discusses the morality of art and the change that can occur in people’s attitude – or absence of change – when they are unexpectedly confronted with art in the public space.

In her article Alice Breemen describes how notions of time and space relate to bodily experiences of performances and installation art. The interaction between the concrete (material) level and the abstract (imaginary) level of bodies and spaces is explored through an intermedial approach of the performance END by Kris Verdonck. The author turns to various theories to elucidate the way in which the ‘space inbetween’, characteristic for intermedial performances, is filled and results in a bodily experience.

Artist Daan Roosegaarde gives a visual impression of his Liquid Space 6.0 project. Liquid Space 6.0 is an interactive work of art which physically becomes bigger and brighter in reaction to human behaviour. This interactive fusion of mechanisms, embedded electronics, sound and LEDs creates an organic dialogue with its visitors.

Artist and poet Ro van Doesburg discusses his project I Stand For You and the way it transforms public space into artistic space. This project proves to provoke surprising and uplifting reflections.

This article offers a qualitative study of e-commerce in relation to the perception of online buyers as “rushed virtual consumers”. A sample of Greek society is the focus of the article. The question that Panayiota Tsatsou explores is to what extent everyday practices and time pressure in particular, determine people’s perceptions of e-commerce and their buying practices. The article reports on interviews with online and off-line buyers in Greece and finds that the pace of everyday life, in terms of ‘time pressure’ and ‘coordination problems’, does not significantly determine the practice of e-commerce in the country.

In the article Karin van Es offers a sceptical investigation of the Urban Screens project’s goals of developing ways by which to stimulate social cohesion based on the existing commercial infrastructure of public screens. Van Es argues that the aim of the project ignores the social, political and economic forces that have designated the existing infrastructure in the first place. In other words, it neglects the site-specificity of the screens. Consequently, she proposes that mobile screenic devices offer better platforms to develop the goals of the Urban Screens project.

Travelling along with the post-mortem portraits made by Elizabeth Heyert, this article explores how different concepts of time and space exist parallel to each other and overlap as well, when the realm of the living gets in touch with the realm of the dead. The concept of travelling will be investigated in both its affirmative and its soliciting aspects: travelling can contribute to a standardization of the way in which physical reality is structured, but can also cause its questioning.

Column: A theory on space-time. Well, kind of… – Max Wiegel

Physics student Max Wiegel tries to comprehend how time and space relate to each other.