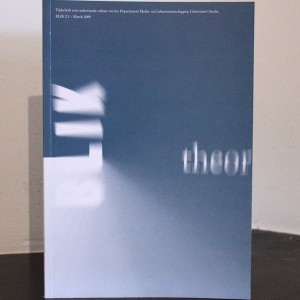 All the contributions in the latest edition of BLIK balance between media theory and practice. In our editorial we discuss how scientific theories can serve as a searchlight in the quest for greater insight and for posing new questions. That light seems to literally shine through our feature image on the cover, which is intentionally out of focus. This because posing new question requires more than an absent-minded gaze, but the attentive vision of the critical observer.

According to Mersch, most people wrongfully worship the possibilities that digital media bring about and lack a critical reflection. In his view, the ‘medium’ is nothing you can grasp easily; rather you have to expose elements or fragments through provocation. Without it, academics as well as everyday users are fooled by an illusion of participation and democratization in the age of digitalization. For Mersch, digitalization is the bizarre ‘god’ of our age.

Artikel: The GUI and the work place: contextualizing the transfer problem – Shirley Niemans

Faced with the challenge of sustaining innovation in the networked economy, management strategies appear that introduce elements of play to the work place. In 2007 IBM initiated research on the way corporate leaders may learn from leadership within Massively Online Role Playing Games, resulting in the suggested transfer of several features of the game gui to the work place. Shirley Niemans aims to highlight the problematic aspects of this research and its acclaimed practical use, arguing for critical reflection on the overall possibility and consequence of transferring technological features from a specifically coded game environment to a corporate setting.

Asher Boersma discusses an art exhibition in the Nederlands Fotomuseum that addressed the distortion that occurs when representing history. In his discussion of some of the featured artworks, Boersma self-reflexively also touches upon the limitations to representation in our very magazine.

For Michal Kobialka, professor at the Department of Theatre Arts & Dance at the University of Minnesota, academic critique is a process of alignments and realignments; a continuous process wherein the actual achievement of a goal is secondary. As part of his Visiting Professorship at the Belle van Zuylen chair from November 2008 till January of 2009, Kobialka organized a lecture series with international guest speakers and an intensive seminar entitled This is my Body.

In his critical analysis of the participation dynamics made possible by Web 2.0, Mirko Schaefer nuances digital media’s claims to direct participation and asserts that these mostly facilitate implicit forms of participation instead.

Essay: Writing (about) fashion: yes, we can! – Nora Welinausen

The field of fashion has become a major topic of scientific inquiry. In her essay Nora Wellhausen aims to draw attention to the fashion blog as production site not only of fashion images, but also of the fashion text.

In a light-hearted reflection upon the US Army’s implementation of new media applications on the battlefields of Iraq, Jan-Willem van der Mijde highlights the disparities between the technological imaginative of the military brass and the reality of the soldiers who have to cope with the restrictions of the Land Warrior system.